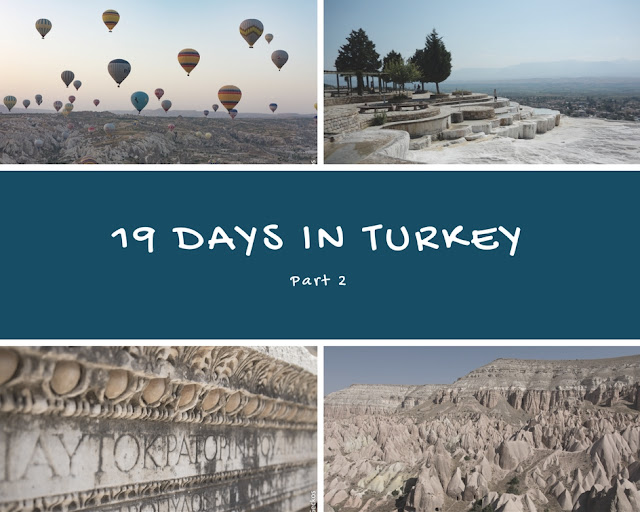 In my continuous effort to keep it real, let me reveal to you another failed theory that I had (and developed) in my younger years; history was boring but I wanted to be Indiana Jones or Lara Croft because for some (better un-explained) reasons, I thought tomb raiding and rummaging in ancient ruins were kind of cool, especially if there's deadly curses involved.
This trip to Turkey and visiting its historical places have opened my eyes; history is awesome and learning how life worked back then was mind opening. And also, tomb raiding and rummaging ancient ruins are pointless since most of the valuable stuff that you can sell in the black market are already been taken care of and kept in a safe place.
I felt very fortunate to be able to visit this country, thanks to my most trustable and reliable method of taking a life-turning decision; coin flipping (we had two countries in mind to visit and it was hard to chose).
Day 11: Antalya

We visited two ancient cities: Perge, an ancient Greek city, and Aspendos, an ancient Greco-Roman city. After visiting a few ruins, I must say back that in the days, baths and theaters were the 'it' places to hang out.

Afterwards, we took another not-so-butt-friendly night bus (it was 11 friggin hour!!) to Urgup.

We arrived in Urgup early in the morning, around 5 AM. The bus trip was shorter than planned but my butt still didn't appreciate it. We decided not to do much on that day, and try to fluffen up our butt by walking around the city. We booked a cave hotel for our stay in Urgup, and I loved it.
Day 13: North Cappadoccia - Devrent Valley, Pasabag, Avanos, Goreme open air museum, Uchisar

And so of course the next day would be the day for the South Cappadocia tour where we visited more remarkable sites.

Okay, did I said there were two ways to enjoy Cappadocia? I was wrong, there were 3 ways! The third (and most fun) way was taking the balloon ride and enjoy the view from above. We didn't plan to take this ride at first since I'm afraid of heights, and the price was rather steep (130 Euro per person). But a wise man said that you have never been in Cappadocia if you didn't take balloon ride. We followed his words like obedient pupils and he was right, it was friggin awesome! Cappadocia is truly visually pleasing. Their land is kind of out of this world, like seriously, it feels like in an unreal reality of future apocalyptic world, in a beautiful way.
Later that day we flew back to Istanbul to continue the rest of the trip.
Day 16: Istanbul - Too much excitements could kill you

We were planning to catch a ferry to visit an island near Istanbul; Buyukada (Princes' Islands) but Nico fell inexplicably sick (it must be the curse from the ruins that finally got him??) so we cancelled the plan and had a relaxing day instead. Him laying hopelessly on bed, while I shopped cheerfully around town. Don't worry, I did take care of him a bit. I fed him bananas.
Day 17: Istanbul - Food tour

As if we didn't eat enough, we joined a food tour and ended up with food coma. Mission accomplished.

Since we travel with backpacks, it is not possible to get souvenirs and travel with them all the way, so we dedicated this last day specifically to go check the Grand Bazaar and the Spice Bazaar meticulously to get the souvenirs we wanted.

Day 19: Fly back to Québec City

Our flight back to Quebec City was in the afternoon so we had the whole morning to have another walk around Sultanahmet and send some postcards (that never actually came!!).
Tags :
travel,  Turkey
Categories :
Uncategorized