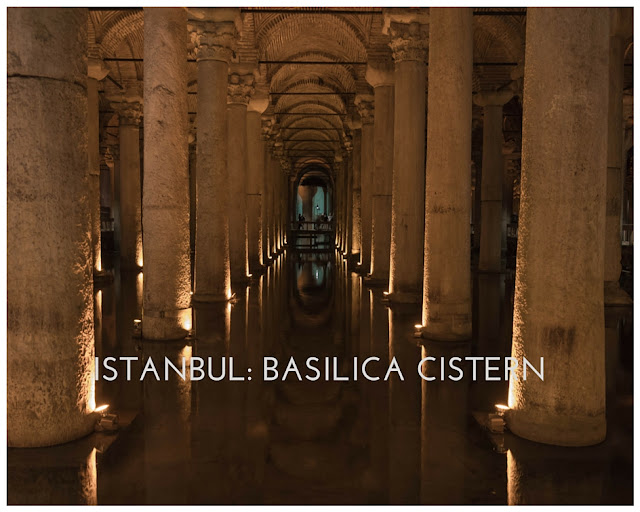 Actually, we found this Basilica cistern by accident. We saw this long-line of people standing, and as former ducks in our previous lives, we followed the crowd and found ourselves lining for we-didn’t know-what. I mean there is always interesting reason behind a long line of people, right?? Apparently there are hundreds of ancient cisterns from the Byzantine period hidden underneath the very streets and houses of Istanbul and two of these cisterns are restored and open for public viewing, and one of them is this Basilica cistern.

The cistern was renovated and opened for public in 1987. It has a small entrance which doesn’t do justice to represent the awesome cistern. It costs 20 TL or around 10 CAD per person to get into the cistern. You will find information flyers about the history of the cistern in many languages for free.
It’s amazing to think that this cistern was built hundreds years ago to supply water to the then town area of Istanbul. I have been told that this cistern held up to 80.000 cubics metres of water from the Black Sea. That is a lot of water!!
The cistern gives us a different experience; an underground sight seeing of the marvelous engineering dated from centuries ago. Inside the cistern is damp, moldy, wet, humid-ish cold, and dark. It is a cistern anyway. The cistern is lit up dimly by hundreds of lights strategically placed on each pillars, giving the cistern a rather eerily romantic ambiance. This ambiance also challenges your photo-taking skills.
Nowadays the cistern mostly used as tourist attraction, filming location, and as a huge carp pool. Yep, you can find gigantic carps in the water. I have no idea how these fishes survives without any sunshine.
This cistern was used as a location of James Bond film From Russia with Love on 1963. You must recognize it from the upside-down Medusa head. There are still an endless theory circling about why the Medusa head is upside down. My theory was; it happened on Friday, back then, and someone who was supposed to put the Head was accidentally put it upside down, and go-home time was calling before he had the time to fix it. The Head was very heavy, so he left it the way it is for the weekend, hoping he would get help to turn it on Monday, but he was being annoying that Saturday evening, drinking all the wine and whatnot, so no body came to help him along with the Head. To cover his fault, he threw a cold rumor that this upside down head meant to shoo away bad spirits. I wonder what Medusa thinks about this shenanigan. The fact is no body ever heard again about the man who was responsible for the placement of the Head till this date. 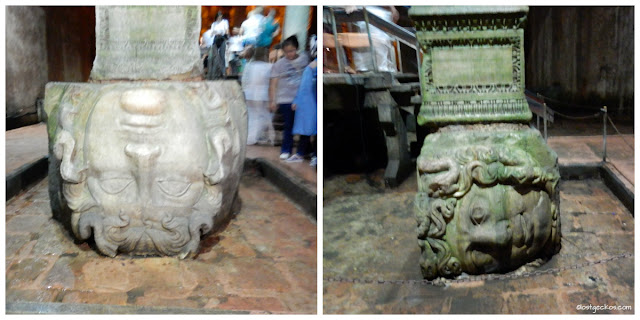