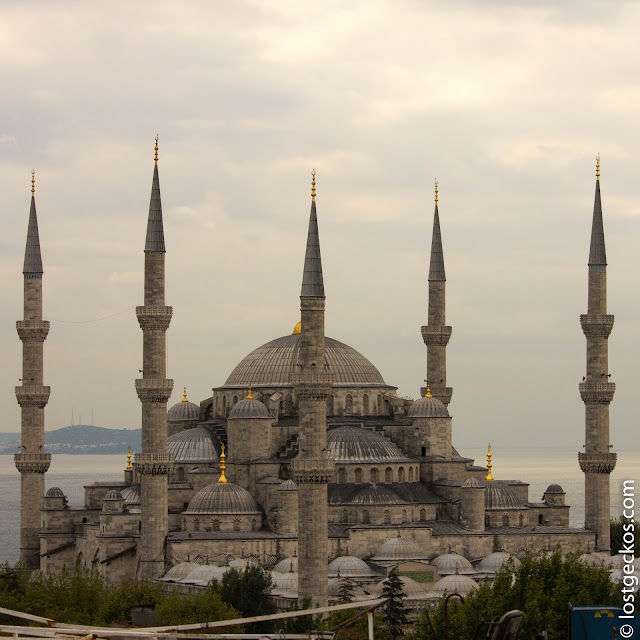 This is truly the most grandiose mosque I have ever seen. It is amazing how people is proud and love their religion so much, they build such a grand and amazing place to pray and still keep it's serene ambiance.

The Sultan Ahmet mosque sits juxtaposed with Hagia Sophia, it is definitely one of the most photogenic building in Istanbul. This mosque is few hundreds years younger than Hagia Sophia and it shows on how the outside looks. The mosque popularly known as Blue Mosque due to the colour of its intricate blue tiling interiors. This mosque is truly an impressive work of art, every bit is beautiful. I was totally awestruck by its intricacy, colour, and vibrance.
This mosque is still fully functioning as a religious place for the moslem, therefore visitors are only allowed when they are decently dressed, no shorts, tube top, short skirts or hanging jeans (okay, hanging jean is unacceptable anywhere anyway). If you come in from the entrance for visitors (there is another entrance for the moslem to pray), you will be greeted and handed a pashmina for the ladies, and a simple robe for those who is not properly dressed that you must give it back on the way out.
The mosque is also famous for its six minarets, in its era, it's the only mosque with 6 minarets apart from the great mosque in Mecca. I will not go into too many details about the history of the mosque because the description alone would span few paragraphs if not more and unfortunately I was busy zoning out, imagining how its like to live as a harem at the Ottoman period when my guide was explaining the uniqueness of the mosque.
There is a well maintained park outside the mosque where you can sit down, have a break from the scorching sun and enjoy the visually pleasing mosque.

Same thing at night, the mosque offers a beautiful scene with a bit of different look. The mosque is lit up by few strategically placed lights and make it really stands out in the darkness of the night.

We stayed near the mosque so we could go to the park near the mosque at night and enjoy the view while discussing our next plan for the day after. There are food vendors and restaurant around the park so we could actually have a mini night picnic on the  park benches. Romantic!
Tags :
travel,  Turkey,  Istanbul
Categories :
Uncategorized