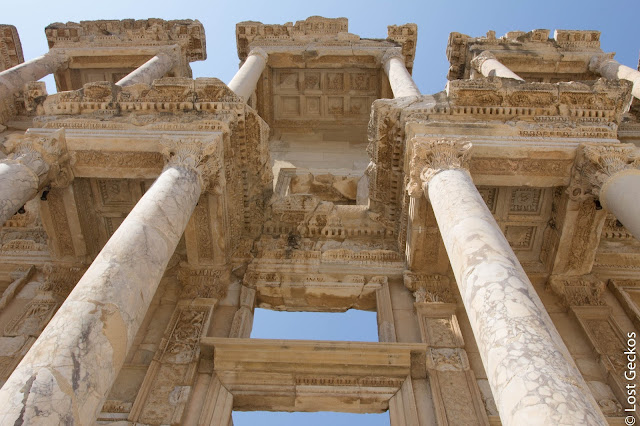 Selçuk is the first city we visit after Istanbul. It took us 11 hours by night bus to get to this place. The night buses in Turkey are mostly very spacious (it has more leg space than any coach class flight I have ever had!) and it is often has wifi available. It's a fancy ride for a cheap price, and yes, I know it did sound like a bus trip to drool for. The only down part was  the trip from Istanbul to Selçuk was a bit too long for my convenient and it stopped every now and then at big bus stops along the way.

Our butt was more than relieved when we finally got to Selçuk. We decided to take guided tours whenever we visit ruins because it helps a lot in understanding the history behind the ruins. We took a minibus (dolmus) to our guide tour office and booked three major tours of Selcuk; Ephesus, The House of Virgin Mary, and Artemis temple. Luckily they allowed us to put our heavy backpack in their office while we take the tour.

We started the day by visiting Isa Bey mosque, one of the oldest mosque in Turkey, built in the 14th century. The mosque looks completely different from the mosques I have seen in Turkey, Isa Bey mosque is much more modest, not so bright in color nor rich in ornaments and details. I have been told that the location of the windows, doors, and domes are placed asymmetrically in purpose, as part of the Selçukian style.


Since we started the day early, we had a chance to make another stop before visiting Ephesus. Our next stop was the House of Virgin Mary. It is believed that Virgin Mary had lived and died in this house. These days the house serves as a shrine, a chapel, and a worship place. This place suppose to be a serene and peaceful place but for some reasons I just didn't feel the holy presence. Perhaps because it was hot and overcrowded (and I am not religious)?

Next stop; Ephesus. Ephesus was once one of the biggest cities in the world and judging by the complexity of the ruins, you can tell that they had such an advanced way of life.

Ephesus was definitely my favorite ruins in Turkey. It was huge and pretty well kept, infact, excavating still going on and the Government is still unearthing thousands of artefact from the long lost city, which means this is not its final form.
As you can see from the map, the city had pretty much everything; huge theatre, baths, water palace, temples, library and even a brothel. An irresponsible (yet interesting) rumours said that  there were underground passages from the library itself and the brothel. This underground passages were used by the noblemen to visit the brothel without being caught by public (or their wife), and they would have an alibi that they were in the library if someone ever question their location at a specific time (the guest book of the library would have their name and signature). Ha!
Another grand thing in this site is its open air theatre, it's so huge it's been said that the theatre could have seated about 25K spectactors! This was where the gladiators fought and died. I got that Russel Crowe's Gladiator movie lingered in instantly in my mind.

Apart from ruins of city parts and its public facilities, we can also find lots of relics from ancient Greek mythologies, like gods and goddesses. Like this winged goddess of Victory, Nike, who inspired one of the world famous footwear producer to carry her names as their brand.
From the ruins you can see that the ancient city had lots of public facilities like libraries and theatre, and they even had Starbucks!.. LOL.. Kidding, this is actually the relief of Goddess Medusa on the arching gate of Hadrian temple. 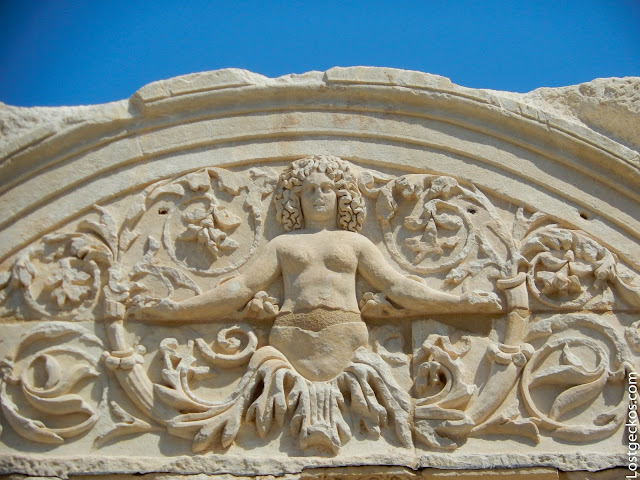 The following picture is the front entrance of the Hadrian temple. You can see the pillars and some parts of the gate have lighter color and less worked on, those are actually newly made by the government as efforts to rebuild and preserve the site as identical as its supposed to be. 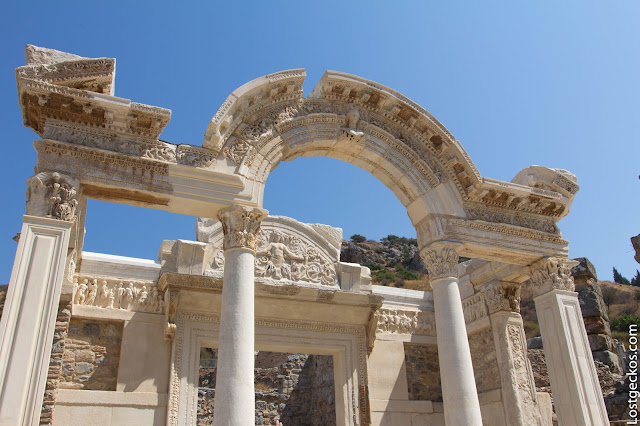 The site was not only fully decorated with ornaments, statues, and symbolic signs, but also with writings. You bet I wished I could read all of those writings!
At the end of the walk, we ended up at the stadium. This stadium has been used for ceremony and sport events. Also, the Christians were persecuted here and were thrown to the lions. Savage! 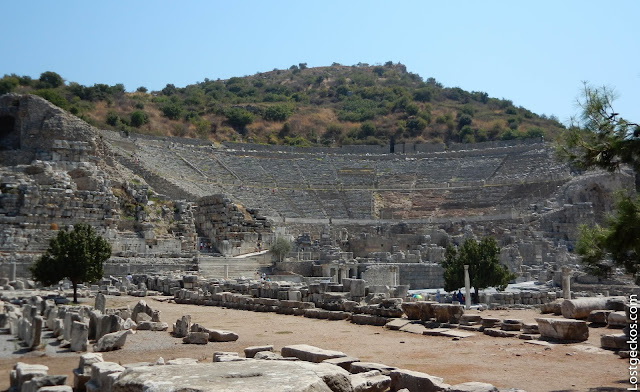 The day we visited this site was sizzling hot and there were barely any shades. I had to make a free (of) style wardrobe improvement by making an instant turban-like head cover from a scarve to protect my head from getting barbecued by the sun. This was how I looked like the entire visit and perhaps it's the reason Nico kept a distance from me the whole day...